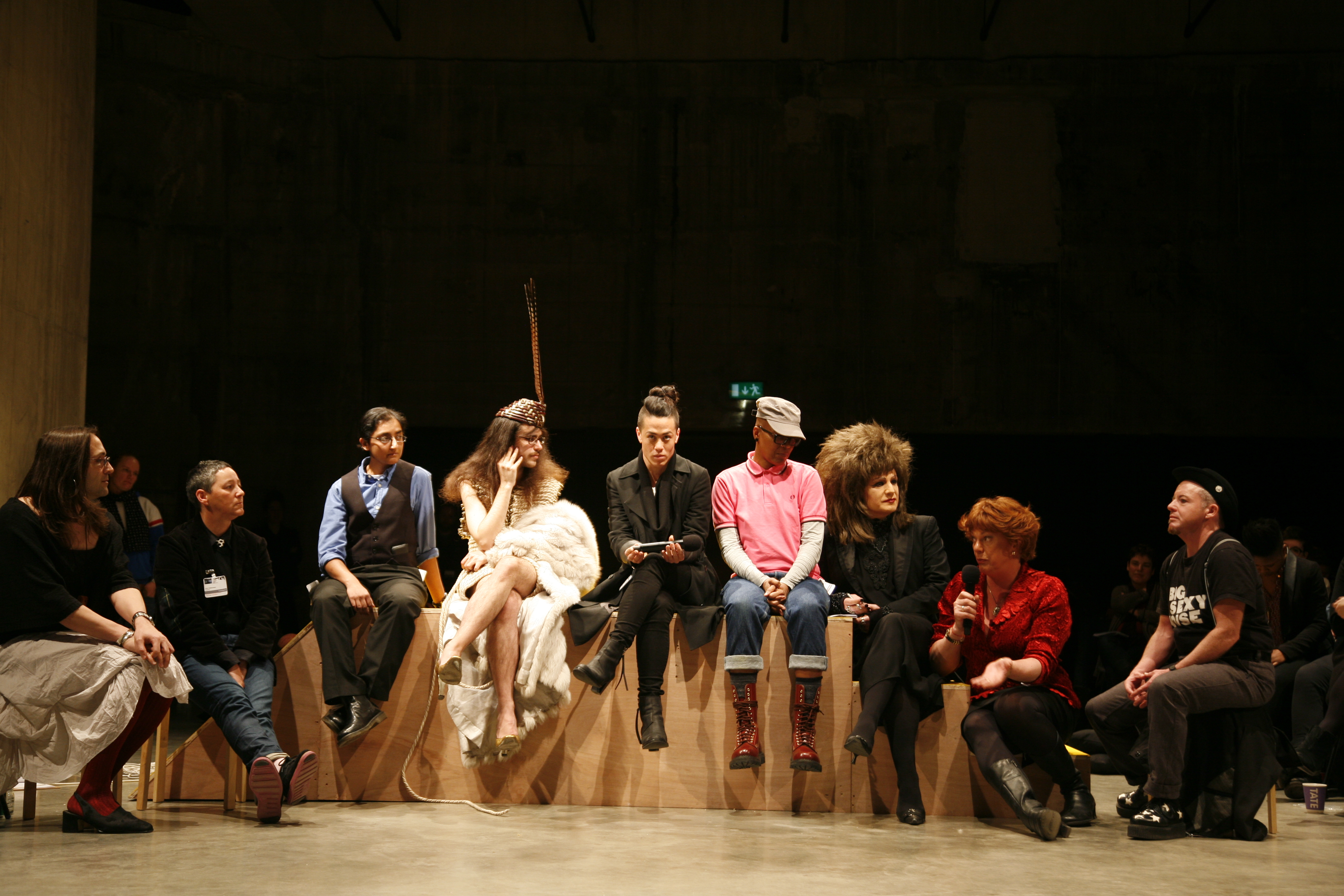 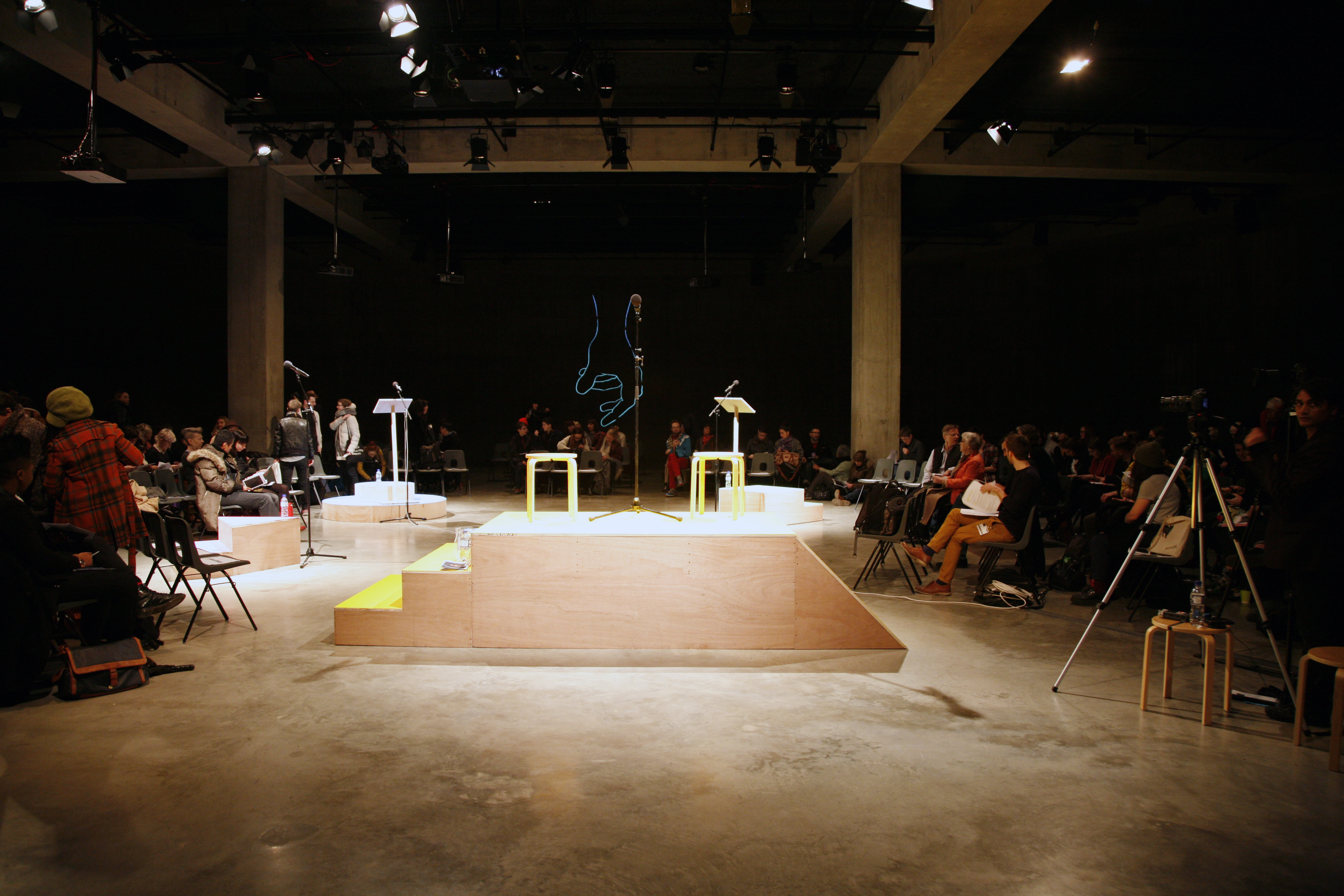 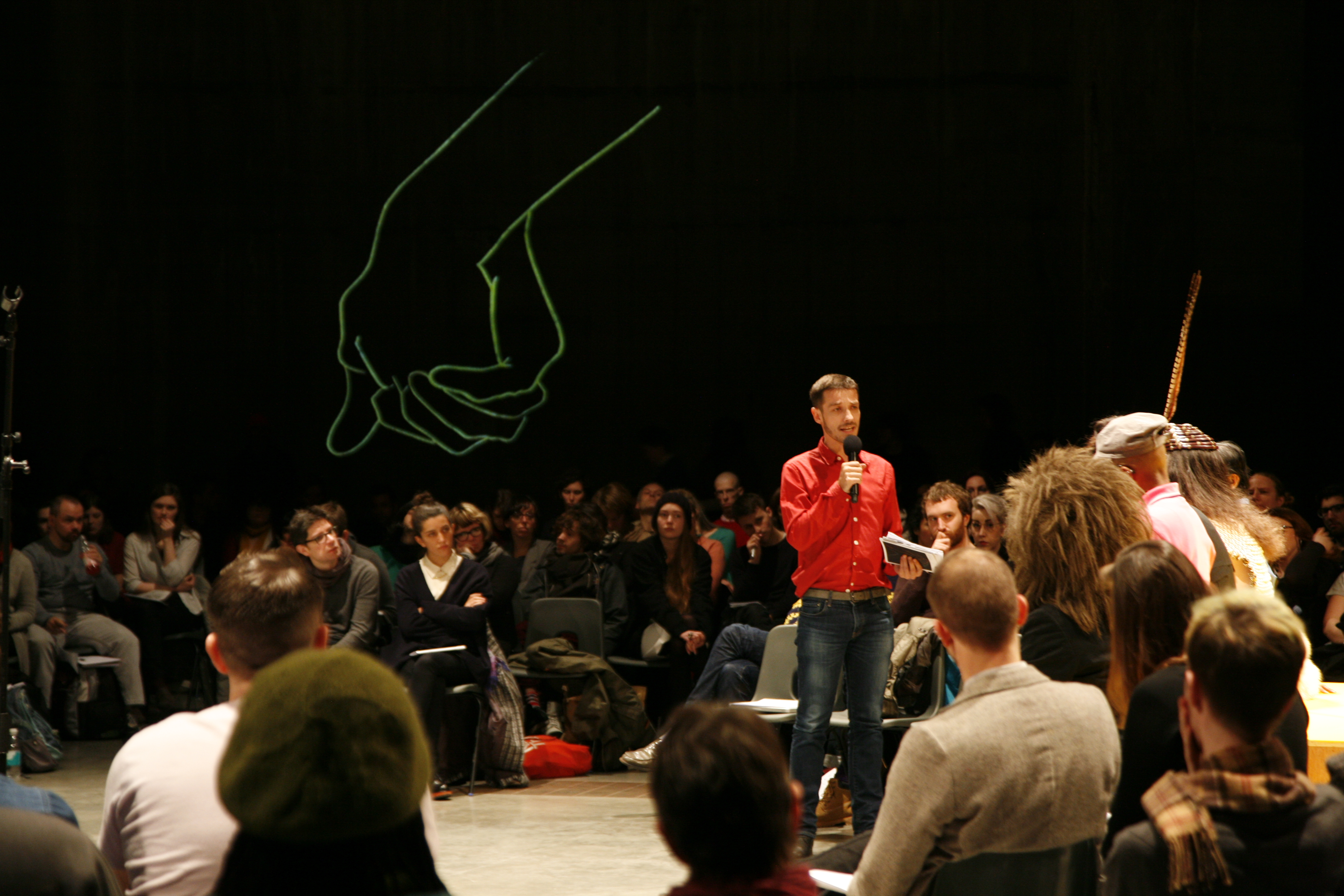 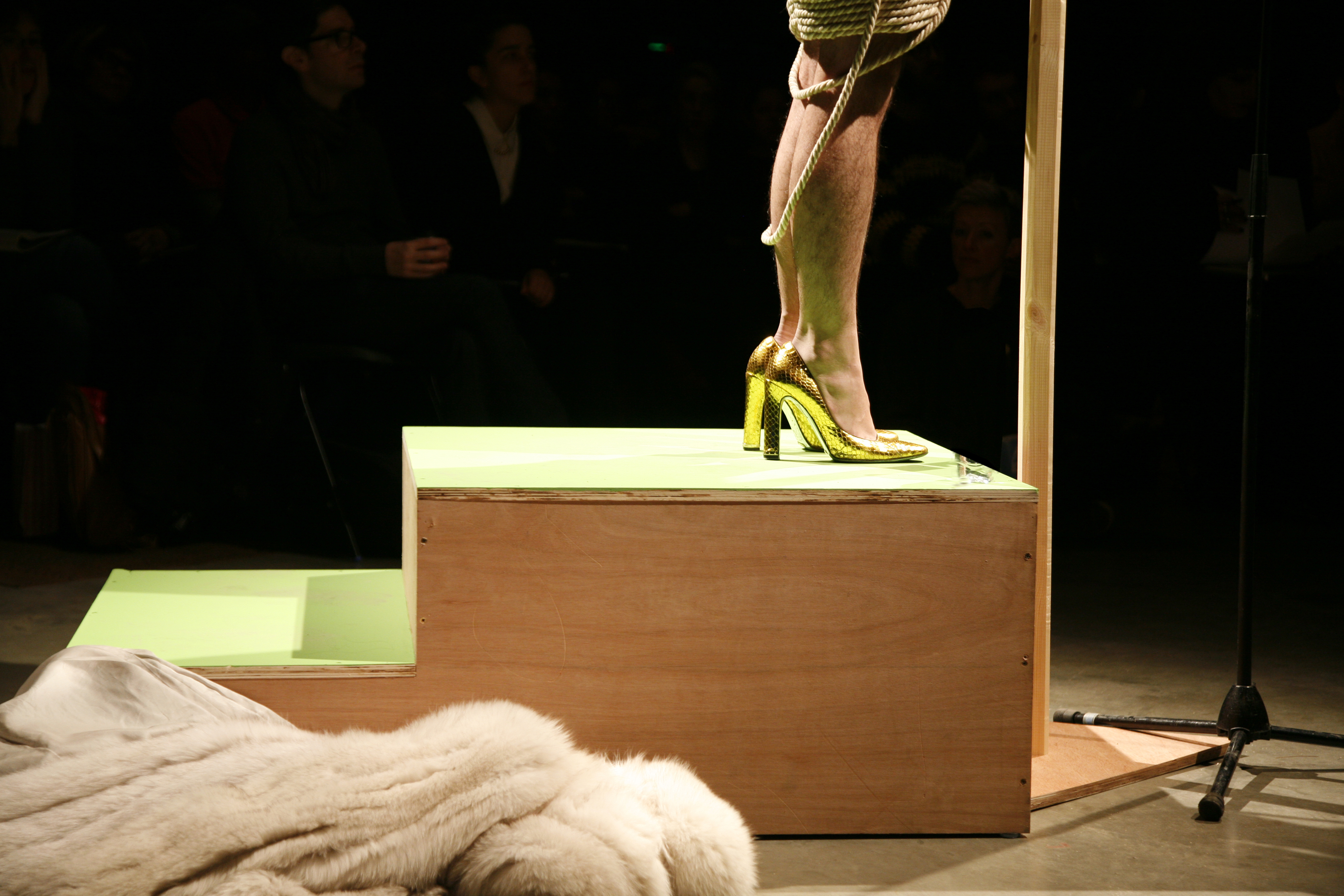 The event was convened by Carlos Motta in collaboration with Electra and took place at TATE Modern’s The Tanks.

Nature
Esben Esther Pirelli Benestad, sexologist and trans activist
Physicists still ponder, postulate and demonstrate new building stones of the universe, some other educated people seem to believe that they perceive a complete image of the world. In that image millions of people are made misshapen, sick, sinful, criminal or non existent. Numerous individuals, whose talents of gender contain great potential values, are doomed to a life as walking bundles of symptoms, medically named ‘syndromes’. At the same time, an increasing number of reflecting people realize that as of today, it is apt to say that human culture is primitive, while nature is complex. There is no real, mature human culture before that culture can embrace and affirm all that is human, including that which is uncommon. Likewise there is no resting ground for any kind of humanity, until we can serve as integrated parts of nature’s own complexity and vulnerability. This talk of nature will address these issues.

Bodies that Queer
Del LaGrace Volcano, artist
To write and perform work about the queer body is my kind of Mission Impossible because although queer is most often considered a noun, in my world, it’s actually a verb in drag passing as an adjective. Queer bodies are ‘Bodies That (Don’t) Matter’. Bodies that are disposable and often disowned. Bodies that are not valued or valuable. Bodies that through the radical act of existence embody resistance. Consider my body, a body that has chosen to amplify rather than erase it’s inter-sexiness. A body that is unwilling to conform to claustrophobic cultural definitions of female or male. A body that puts itself on the line to be judged by you. What does the queer body do? It performs abjection and provides a visceral demonstration of marginal magic. Through this act of repudiation, the queer body screams, look at me and love me…if you dare.

Gaga Manifesto
J. Jack Halberstam, author and professor
At a time when the very rich are consolidating their ill gotten gains at the expense of the growing numbers of the poor, the queer, the dispossessed, the criminalised, the pathologised, the foreign, the deportable, disposable, dispensable, deplorable mob, at this time, we should start to talk about anarchy. When the state is actually the author of the very problems it proposes to cure – lack of public funds, low rate of education and health care, business models for everything from governance to education, no redistribution of wealth, homelessness– we need to seek alternatives to the state. When the church has more power than the people, when the military gets more funding than schools, when white people get away with murder and people of colour linger in overcrowded prisons for possession of marijuana, when queer people are cast as perverts unless they get married, we need to seek alternatives to law and order, to discipline and punishment. We need queer anarchy now.

Impossibility Now
Dean Spade, professor and founder Sylvia Rivera Law Project
This short film manifesto examines how trans politics emerges to resist and dismantle racialized gender norms in the context of growing apparatuses of criminalization, immigration enforcement and war. It calls for a critical trans politics that refuses recognition and inclusion on neoliberal terms and proposes a world without bosses, prisons, borders, or wars – a world that, like trans people, has already been declared impossible.

We Are Not Welcome Here
Terre Thaemlitz, artist
Gender Talents proposes “the relation between self-determination and solidarity in processes of systemic change form the foundation of a pragmatic, but also euphoric exploration of ways of being ungoverned by normative gender.” Like many, I disbelieve in the fundamental premise of self-determination. And like many, my scepticism towards constructs of community, which is born of social traumas, leaves me leery of acts of solidarity. Furthermore, amidst a cultural climate of globalizing humanism that demands enthusiasm and optimism of its participants, I feel politically averse to participating in public displays of euphoria and joy. This aversion is doubled within music and art contexts, where transgendered persons (particularly anyone fitting into an MTF category) are expected to be campy and entertaining. During our time at Gender Talents I will do my best to draw focus away from the euphoric, and towards the traumatic and violent.

Pharmacopornographic counter-fictions
Beatriz Preciado, philosopher and queer activist
At the time of global extension of biopower and pharmacopornographic techniques of production of sexual subjectivities, a new alliance of critical movements is needed. We, the pharmacopornographic workers of Earth, transbodies, migrants, animals, indigenous, gender-queer, crips and sex workers, are inventing new technologies of production of life and subjectivity. We refuse the narrow specialised position of the gender-equality NGO, as if the domains of economic and political production of life will exceed gender politics. We are the somatic and sexualized workforce of global Postfordism. Genderpolitics is Terrapolitics! Against the extension of the Warfare State, we produce resistance within common networks of affect, music, seeds, joy, water, words, microbes, molecules… We are the post-porn Parliament to come. They say Represent. We say Experiment. They say Identity. We say Multitude. They say Debt. We say Sexual Cooperation and Somatic Interdependency. They say Human Capital. We say Multispecies Alliance. They say Crisis. We say Revolution.

travesti manifesto
Giuseppe Camouzano, artist and philosopher
The travesti manifesto dismantles the gender binary through certain moments of the body, both historical and invented. An indigenous androgyne, mediating the known and the unknown produces culture. Veiled rebels are anonymous power from non-essentialist societies. A daubed hero that sexualizes chronic messianisms. Virgin archives: a Marian postporn, her devotees and their sexual work through the press; their fluids to re-read archives. While history becomes trans[i]tory, the gender bubble bursts due to such overlapping of experiences. Transanger from Androgynopolis, as the core of history, a strategic post-identity carnival to problematize a little binary world.

How to love being the outsider – A manifesto for QPOC online creativity
Campbell X, filmmaker
We have increasingly found ourselves to be a tokenistic presence in mainstream LG BTI media. Our narratives are stolen, and our truths remixed to conform to Eurocentric post-colonial imaginings. We take back our desires, our stories, our lives through social media and social video. Our revolution will certainly NOT be televised!

Personal and Transferable
Xabier Arakistain, feminist curator and critic
Feminism is knowledge. Knowledge that is especially useful for sexual, gender and sex dissidents. On the personal level, the discovery of feminism in its third wave, that ‘the personal is political’ and the scientific verification that sex, gender and sexuality are cultural, not natural, constructions was a relief in order to fight pressure and also an indispensable map for understanding my own position and the genesis and dynamics of sex, gender and sexual oppressions. That same feminist wave made it possible for women for the first time to participate in artistic practice and theory from the 1960s onwards. On a professional level, I contribute to this movement by using sex as a curatorial criterion and combining the Nochlin and Pollock perspectives as complementary within a contemporary project of feminist transformation in the field of art and in the societies that produce it.

With Intent
Wu Tsang & Tamsila Taquir, Safra Project
Stories have the power to transform seemingly random information and experiences into something relatable, follow-able, or even entertaining. If you are communicating it’s impossible to avoid narrating, because you have to put things in sequence in order to make sense. As organizers, we often use storytelling to relay ideas or analysis – to give an account or expose the underlying links between things, in hopes of affecting peoples’ consciousness. But in a sense stories are also dishonest because they can offer only a condensed version, a perspective, or an interpretation of a more complex reality. This manifesto is an attempt to make meaning without telling any story or lie.